Gloriosa Daisies The Beginnings And Here To Stay

The post Gloriosa Daisies The Beginnings And Here To Stay appeared first on Plant Care Today.

Over 60 years have passed since the introduction of Gloriosa Daisies to the gardening public. Many growers, I believe, would name the ‘Gloriosa Daisy’ as one of the all-time beautiful things to come out of a seed packet. It is an “average gardener’s” flower good enough for the most discriminating of connoisseurs.

These daisies grow in just plain old dirt – the soil does not need to be moist, mellow, and rich.

They’ll endure – and even enjoy – hot sunshine, and produce quantities of amazingly durable, varied and beautiful flowers all through the hot summertime.

Gloriosa Daisies in an almost literal sense are everyday little country flowers. They went off to college and became glamour queens.

The History Of Where The Gloriosa Began

The story started more than 100 years ago with Black-eyed Susan, more formally known as Rudbeckia hirta.

The Black-eyed Susan is a common wilding of western prairies which spread to become a roadside weed in eastern and southern states.

The late Dr. Albert F. Blakeslee, a plant scientist then at the University of Connecticut, began collecting different “Susans.”

He was interested in the varying flower forms he found in the wild plants.

Cross-breeding them, he increased the size as well as number of “ray flowers” or petals until he had fully double blossoms.

He worked with the better ones over the years.

Part of the time in his garden, and continued with them when he became Director of the Smith College Genetics Experiment Station.

Both Amateur and Professional

Plant breeders who made use of the drug colchicine were interested to know that during the 1930s Dr. Blakeslee treated seeds of normal diploid Black-eyed Susans with colchicine and succeeded in doubling the chromosome count to produce tetraploid rudbeckias.

These gave the “king size” flowers we now enjoy.

After Dr. Blakeslee’s death, development of the flowers continued at the W. Atlee Burpee Co.

In 1957 a much glamorized Black-eyed Susan became “cover girl” on the Burpee seed catalog, with a new name, Gloriosa Daisy. 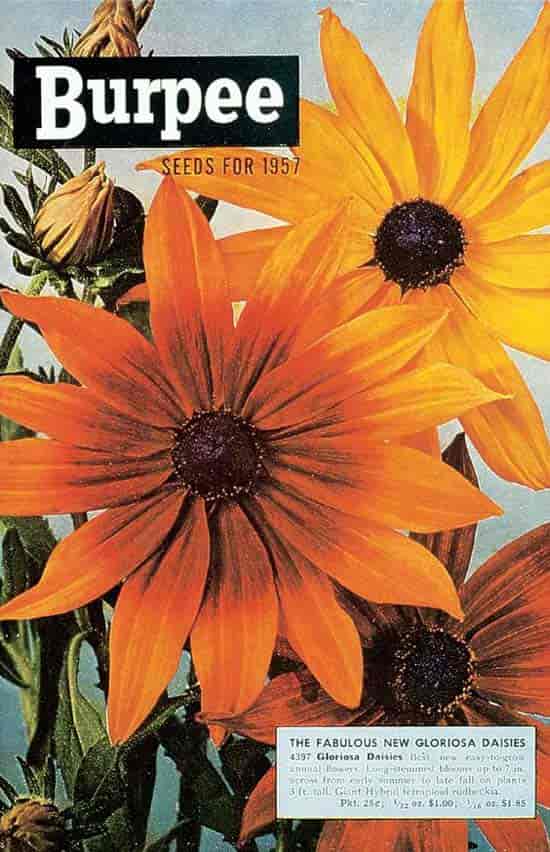 First seeds offered were of the sizeable single-flowered strain in mixed colors.

Though other selections are on the market now, who would want to go through a summer season without the pleasure of watching a sizable planting of mixed Gloriosa Daisies, come into bloom?

There’s never an unattractive one in the lot, and many individuals are outstanding.

All have the large, dark-colored cone of disk flowers in the center.

The petals may flare out in nearly flat formation, arch out and down, or quill and twist gracefully.

Some flowers are selfs, but mostly they come in eyed and zoned patterns which may have clean-cut, sharply contrasting areas or subtle blendings of one shade into another.

All harmonize beautifully in mass plantings and give an eye-full of color, for they are big daisies, often five to six inches across, abundantly produced and displayed well above the foliage on tall stems.

The strong stems, incidentally, and lasting quality adapt these flowers well for cutting.

In 1960 seeds were offered of the first separate color selection – a golden yellow single flower called the Gloriosa Golden Daisy.

It had, of course, the contrasting dark brown cone or “eye” in the center of each bloom.

Gardeners who from the first grew Gloriosa Daisies in moderate quantity were sometimes intrigued by finding plants with semi-double and even double flowers.

So it was not too surprising but welcome news in 1961 to learn that one of the All-America flower selections- a Silver Medal winner – was Gloriosa Double Daisies, also a Burpee introduction.

Quite different from the others, these did not have a typical “daisy” form at all, but with their many petals look a good deal like golden yellow chrysanthemums.

Some of the blooms come semi-double, and partly open centers reveal the dark eye inherited from the single type.

Further good news from the developer was that in 1963 the public we will be able to buy seeds of the popular bicolor pattern of mahogany and gold single-flowered Gloriosa Daisy under the name of Pinwheel.

These daisies are new enough that we are still learning things about their culture.

Each grower who tries them can contribute to the general fund of gardening knowledge for their particular area.

Growing them is not difficult; far from it, they’re easy.

But they can be handled in different ways, and a little experience will teach you the best way.

There’s even some doubt about how to classify them.

I’ve seen them listed as hardy annuals and also as perennials, and in some gardens, they’ve turned out to be biennials!

Will Bloom In One Season

They can grow as annuals.

With seeds started in a flat at a sunny window in February or March, many have no trouble getting flowering plants by late summer.

For large, many-branched plants, however, and maximum, long-season flower production, work them on a two-year cycle.

Start seeds in midsummer in a flat. While any humusy, pulverized soil would probably do, use the following:

Practically every sown seed sowed in this mix will germinate and grow well if watered occasionally with liquid plant food.

When seedlings are large enough to transplant, shift them to the ground, about six inches apart in a row alongside the vegetable garden where space is reserved for flowers.

This operation may involve a little shading and watering for a few days, as it comes during a usually hot and dry season.

By fall many of the little plants will branch out into multiple crowns and often there is a bloom or two before frost.

But mostly the foliage develops as a large-leaved rosette, lying pretty close to the ground.

These live through Tennessee winters with no cover, in spite of temperatures for brief periods reaching zero or a few degrees below.

Farther north a light mulch of straw or similar loose material might be desirable, mainly to protect the leaves from cold, drying winds.

No solid covering should be used, as the plants need both light and air.

Plants can often be lifted easily with balls of dirt on the roots, even when flower buds are showing, and reset them in other places.

A six-inch spacing is too close for the best development of blooms for cutting.

Go through with a trowel in April, lift out each other plant, and transfer these to display beds or borders some 12″ to 14″ inches apart.

Some of our garden centers and nurseries are missing out by not having one-year Gloriosa Daisy plants like these available for spring sales.

Perhaps some do, but the only ones I’ve seen offered were small plants in peat pots from spring-sown seeds.

The older plants would have to sell for more, of course, but they are worth more.

Branching out and merging together year-old Gloriosa Daisies help brace themselves.

Since they grow up two to three feet tall and half as wide, a little extra support is advisable.

Drive inconspicuous stakes behind the plants and loop soft tomato twine around so the beating rains can’t tear off branches or force over entire plants.

The flowers themselves are remarkably durable for weeks and weeks through our hottest summer weather.

They are relatively pest free, too.

In more northern localities, where summers are cooler, Gloriosa Daisies often prove to be true perennials and live for a number of years.

To give the whole story, however, my big plants put on their grand show as two-year-olds, then died.

Not one has ever lived through the next winter.

Passing of the older plants doesn’t mean I am without the daisies.

The climbing Hydrangea is a woody, vine species of hydrangea belonging to the Hydrangeaceae family. The plant is native to Japan, Siberia, and the Korean peninsula.This plant has two plant types or cultivators you’ll find at the garden center – firefly climbing hydrangea and Miranda climbing hydrangea.

END_OF_DOCUMENT_TOKEN_TO_BE_REPLACED

What Is A Composite Flower?

Briefly, a composite is a member of the composite family (Compositae or Asteraceae family).However, such a statement conveys little information to one who is just learning.It becomes clearer to say that a composite is a member of the daisy family or the Sunflower family, Aster flowers, Thistle, Chicory or Ragweed family. But garden magazines, garden books, and nursery catalogs frequently use the word composite.We should become thoroughly familiar with it. The best way to know a word is to use it.

END_OF_DOCUMENT_TOKEN_TO_BE_REPLACED

These easy-care, low-water plants are found in the Northern Hemisphere, but some members are native to South America and Africa.

END_OF_DOCUMENT_TOKEN_TO_BE_REPLACED

The Secret Life of Soil