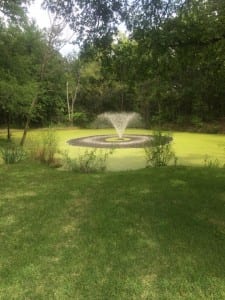 I have a confession to make. I really like duckweed. I think that it’s pretty, and can be really interesting to look at. The way that it propagates so rapidly is really impressive, and the free-floating roots are neat. Watermeal, a type of duckweed, doesn’t even have roots, it just absorbs nutrients and water directly through the bottom of it’s frond. Watermeal is also worth noting for being the smallest known flowering plant.
Duckweed, though, can be a huge problem in a pond. In good conditions, a duckweed plant can bud and divide once per day, meaning a daily doubling of the plant population and complete coverage of a large pond in weeks. Many pond owners have learned that duckweed can be an object lesson in the power of exponential growth. Coverage of a pond with duckweed and watermeal (they’re often found together) can cause significant problems for a pond. They block the sun’s light from penetrating the water, which will quickly kill off healthy, water-cleaning algae. Without this algae, nutrient levels will explode, creating unhealthy algae blooms and significant buildup of organic debris in the pond (the sludge layer). This will encourage growth of anaerobic bacteria, which create toxic water conditions that can kill fish, turtles, and other plants and further encourage the duckweed proliferation. That’s all bad.
Smaller backyard ponds generally don’t have much trouble with duckweed. That’s because it’s a fairly fragile plant that doesn’t do very well in moving water, and a pond with a fountain or waterfall will usually move enough to keep it down. It tends to be large ponds and even small lakes (especially manmade ones) that have the most trouble with duckweed. In a large, relatively stagnant pond, duckweed’s rapid proliferation and tendency to travel along waterways and on animals can cause it to take hold and completely take over a pond quickly, and once it’s got hold it can be difficult to get rid of. If you have a strategy, though, you can control unwanted infestations and even prevent it from taking hold.

Eliminating established duckweed can be done with certain herbicidal chemicals, but this isn’t the route that I recommend, especially not at first. Rather, I’d go with a two-pronged mechanical approach to removing the pest. The first step is to simply skim out as much duckweed as you can. A simple pond net or even a pool skimmer or fine fishing net can be used. Wait to do it on a windy day, if possible, when the plants will be more compressed on one side of the pond. You’d be amazed at how quickly you can devastate the population of duckweed in your pond.
This won’t, however, be a permanent solution. If even a few tiny plants avoid removal, then they will likely come back, sometimes covering a pond in as little as a week. Once you’ve got the majority of the weeds out of the pond, though, you can go on to the second part of your attack, which will keep the duckweed from taking over again.
The same fragility that makes duckweed a rare problem in small ponds can be taken advantage of in larger ponds with one or both of two pieces of equipment. The first is a simple fountain, though a larger one than you would see in a small pond. Large pond fountains do two things: first, they agitate the water surface, making it more difficult for the duckweed to survive and spread. Second, it aerates the water, which will give the healthy aerobic algae a chance to remove some of the excess nutrients from the water that the duckweed thrives on.
The second simple piece of equipment that can help to eliminate duckweed infestations is a bubble aerator. This accomplishes the same tasks as the fountain, though it is far better at deep aeration and not as good at surface agitation. A good bubble aerator is just as, if not more, useful for keeping a pond healthy in a larger body of water, especially ponds that take in a lot of agricultural or commercial runoff that can carry huge amounts of nutrients that need lots of healthy algae to deal with.
Huge thanks to Joel, a customer who sent us an email telling us about his experience with getting rid of duckweed, along with the images that accompany this post!

Here are before and after pictures taken just one week apart. Our pond was completely covered by Duck Weed and Milweed. No fish or turtles any more. We installed the Kasko just over a week ago and skimmed the offending growth. Now it looks great and is remaining free of new growth. Aeration really works!
We’ll soon be stocking with fish again! Thanks!
https://temp.gardeningcalendar.ca/articles/nga/heres-why-cold-water-fish-food-matters/

The bubbles rising from your aerator not only circulate the water, but also break up the surface tension as they break the surface. This has a few beneficial effects. First, it prevents some water-walking insects from taking advantage of your pond. The most important of these, of course, is mosquitos, which can otherwise use your pond to lay eggs. 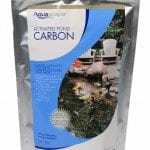 Fixing the tea coloration in your pond’s water requires two basic steps: get rid of the source that’s putting it in the water, and taking it out of the water itself.

Even in winter, partial water changes can help to provide healthier, less polluted water for your be-finned friends. Do this very carefully, though, changing water much less aggressively than you would in warmer times. Slower winter metabolisms potentially means that your pond recovers from water changes less quickly.

Many a homeowner would love to step out into their backyard to enjoy a pond, with the relaxing aura it can provide. The steps of adding a backyard pond often times seem too difficult for homeowners. However, that’s not the case. An old tractor tire comes in handy when creating this garden decoration and water feature.

…sludge and buildup that needs to be vacuumed out, and if you can get it out of there before the water warms up to let the rot and anaerobic bacteria really get revved up, you can save yourself a TON of troubles throughout the rest of the year

…when your water does ice over, you definitely don’t want to break it by hitting the ice. Here’s why:
Water is extremely resistant to mechanical compression. When you push on water, it doesn’t squeeze down, but moves and transmits that force to somewhere else, pushing against whatever is containing it

GardeningCalendar.ca is supported by its readers and advertisers. If you click on links on this site, the site may earn a commission.